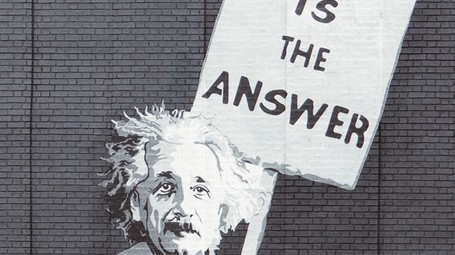 Alice Calaprice was born in Berlin, Germany, and emigrated to the United States with her mother and sister in 1951. After graduating from the University of California at Berkeley, in 1970, she began working at the Einstein Archive of the Institute for Advanced Study at Princeton. Here she indexed all 42,000 documents in the archive. She later went on to work as an editor at Princeton University Press. Calaprice is the author of a series of books on Albert Einstein, about whom she is widely acknowledged as an expert.

Trevor Lipscombe graduated in theoretical physics from the University of London and then went on to complete his doctorate in theoretical physics at Oxford. He is a member of the Royal Astronomical Society and has taught at Oxford, the City University of New York, and Johns Hopkins University. He is a Fellow of the Royal Astronomical Society, and has been widely published in physics research journals as well as journals devoted to physics teaching. Over the years, he has taken part in many initiatives to help bring physics to a broader audience, including such events as an edible-car contest and a mass experiment to see if toast lands butter-side down. His latest book is titled The Physics of Rugby.

Albert Einstein was a genius and a paradox, a common combination for the great thinkers of every age

When we hear the word genius, there is one image that immediately comes to mind, the dishevelled face of Albert Einstein. Named one of the hundred most influential people of the twentieth century by the prestigious Time magazine, Einstein revolutionised the world of physics in a way that hadn’t happened since Isaac Newton.

It is thanks to him that, among other things, we know that light is made up of both waves and particles, and that gravity is the manifestation of the space-time curvature. His famous equation of the equivalence between mass and energy (E = mc2) was essential in creating the atomic bomb (even if Einstein was not directly involved in the Manhattan Project) and, being perfectly symmetrical, was also used to find - thanks to the creation of Large Hadron Colliders (Lhc) or particle accelerators - particles such as the Higgs boson, whose existence had previously only been speculated about.

His theories in the field of modern physics have earned him a place among the great scientists throughout the ages, but remembering Albert Einstein for this alone would be to underestimate his talents. Einstein was also a firm pacifist, a man who did not hold back from expressing his dissent towards dangerous political choices, even at the expense of his own safety. To this he added an eccentric personality, endowed with a great sense of humour, profound humanity, huge charisma and courage. His interests were not only related to physics, but also crossed into the humanities, and he had an intense passion for music.

Albert Einstein, the man, also embodied a series of paradoxes. He was a staunch pacifist but in August 1939 he wrote a letter - along with other physicists - to United States President Franklin D. Roosevelt, urging him to start a nuclear program for fear that Germany would be the first to build the atomic bomb. He loved both children and animals, but was unable to be a loving father to his own children. Whilst he was deeply respectful of others, generally open-minded, and capable of enabling his assistants’ professional growth, he treated his first wife with contempt and was quite cruel to her. Her name was Mileva Marić, and she was also his intellectual sparring partner, so much so that she is still recognised as sharing the credit for many of her husband’s revolutionary discoveries.

The key ideas of "Albert Einstein"

Albert Einstein was a genius and a paradox, a common combination for the great thinkers of every age

Albert Einstein was a very curious person, a determining characteristic in becoming a good scientist

1905 was an ‘Annus Mirabilis’ for Albert Einstein: he published four revolutionary scientific articles that boosted his career

Albert Einstein was a born pacifist

As Albert Einstein became more well-known, his marriage to Mileva fell apart: they divorced and he married his cousin, Elsa Lowenthal

In his years at Princeton, Albert Einstein gradually left his research to spend his time on education

After his death, Einstein’s brain became a legend