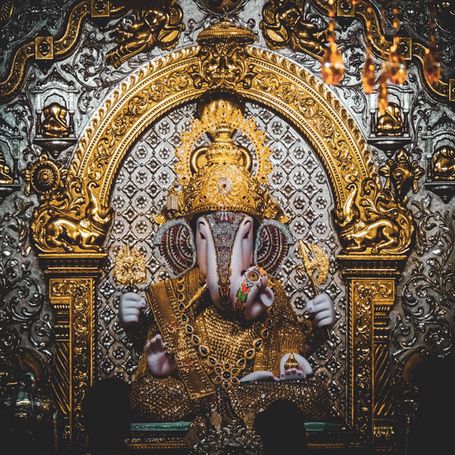 Anne-Marie Esnoul (1908-1996) was a French Indologist author who wrote several books on Hinduism. During her career, she taught Sanskrit and worked for years in the department of religious science at the École pratique des hautes études (EPHE).She was also a student of Olivier Lacombe, an Indologist, academic, and professor of comparative philosophy at the Sorbonne University in Paris.

An essential part of Indian religious literature, the Bhagavad Gita, is set in a battlefield, a metaphor for the ethical and moral struggles that humans are called to face in life

The Bhagavad Gita (meaning “The Chant of the Blessed Lord”) is presented as a dialogue that takes place between the warrior-prince Arjuna and his charioteer, Krishna, on the battlefield of Kurukshetra. Krishna is Bhagavan, the Lord, the mysterious incarnation of Lord Vishnu, the aspect of God who fosters and preserves the universe against forces constantly working to destroy and corrupt it. However, the battle of the Bhagavad Gita is not Krishna’s fight, so he assumes the lowly position of charioteer out of love for Arjuna so that he can help him. In this role, he is in a perfect position to give advice and encouragement to Arjuna without violating his promise not to join the fight himself. The reason for the battle is that prince Arjuna and his brothers have been robbed of their kingdom. Arjuna and his brothers are known as the Pandavas “the sons of Pandu”, and the opposing family is called the Kauravas, “the sons of Kuru”.

The two clans are linked by close kinship because they both belong to the Kuru dynasty. This closeness means a lot to Arjuna, and when he sees the faces of his friends and relatives in the opposing army, he decides not to fight. The idea of killing someone from his own family torments him and makes him doubt the path he has chosen, and it is at this point that the discussion between Arjuna and Krishna (the charioteer) begins. Arjuna tells Krishna that he has many doubts about going into battle, but Krishna helps restore the prince’s confidence, so he takes up his arms and prepares to fight.

On the morning of the battle, Arjuna turns to Krishna and asks him some deeper questions about life which he has never asked before. The Bhagavad Gita is Krishna’s answer, for which he abandons his human characteristics, to take on those of the god Vishnu, of whom he is the incarnation. He is therefore the Absolute, the Supreme Being, the root and foundation of everything. So what Krishna actually passes on to Arjuna are divine notions about spiritual realisation and the attainment of one’s purpose in life. In particular, the prince’s purpose is linked to his role as leader within the Pandavas army. Krishna also talks about devotion, sacrifice, and the balance between faithful worship and the benevolence that the divine has towards him.

The key ideas of "Bhagavad Gita"

An essential part of Indian religious literature, the Bhagavad Gita, is set in a battlefield, a metaphor for the ethical and moral struggles that humans are called to face in life

Clarity is achieved by freeing yourself from attachment to the senses, which give rise to desire then anger

Karma yoga is the active path of selfless service, and joins metaphysical knowledge with the search for good

Yogi – a person who does their job without considering any rewards. Yogis practice rituals which help control the mind.

We must dedicate everything we do to Lord Krishna, the beneficiary of all sacrifices

True knowledge has nothing to do with the body, but with the Supreme Soul, also known as the Absolute

The illusory world, that is, everything that surrounds us, is made up of three qualities called gunas: sattva, rajas and tamas

We must carry out acts of sacrifice, charity, and austerity without being attached to them or expecting any results