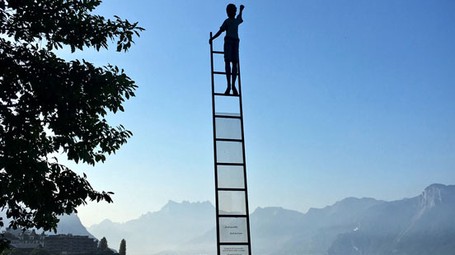 David Goggins is a retired Navy SEAL, who served in Afghanistan and Iraq. He is an endurance athlete, and is specialised in the ultra-marathon, triathlon and ultra-triathlon. He is in the Guinness World Records for completing 4,030 pull-ups in 17 hours. He is also a motivational speaker for large companies, professional sports teams, and college students.

David Goggins’ childhood was marred by a tyrannical and abusive father, but he and his mother managed to escape from the hell he put them through

David Goggins was born in 1975 in Buffalo, New York. His childhood was far from idyllic, and from the age of six, his father’s tyrannical rule governed his life. His father, Trunnis, was a self-made entrepreneur who earned a good living running Skateland, a disco skating rink. David, his older brother, and his young mother would spend hours at the rink every day, from six o’clock in the evening until late at night, and had to run the entire business. It was a popular place, and was always full of people, especially families.

In addition to cleaning the rink before opening, and cleaning the toilets after closing time, David was in charge of keeping the skates tidy and clean for customers to rent, while his mother and brother were kept busy with other tasks. After their shift was over, he and his brother almost always had to spend the night on the sofa in a room above the rink, from where they could hear the noise of the disco from below. The next morning, they would have to be up early for school.

They lived in a decent neighbourhood, in a comfortable house, and they always had nice cars. From the outside, they looked like the perfect family, but this was not, in fact, the case. David’s father was a violent man, and he would abuse the entire family, beating his wife and children for the slightest thing. Young David went to school exhausted every day, and his teacher’s voice was the lullaby that sent him off to sleep. He learnt nothing, because he was always too tired, and too scared. Even when he went out to play in the school playground with his classmates, he was anxious, and had to be careful not to show the bruises that covered his body.

When David was eight years old, his mother managed to make an escape plan with the help of a kind-hearted neighbour and a credit card she had managed to get in Trunnis’ name, even though he had always refused to marry her or share his earnings with her. In an old Volvo, they set out for Brazil, a small town in Indiana, where David’s maternal grandparents lived.

The key ideas of "Can't Hurt Me"

David Goggins’ childhood was marred by a tyrannical and abusive father, but he and his mother managed to escape from the hell he put them through

Even though he had escaped his father, the shadow of his past stayed with him, and continued to torment him

David became accustomed to feeling like a victim, and only a big dream could help him give his life purpose

The darkness once again comes after the light: the time had come to understand that our worst enemy is not an external force, but in fact lives within us

If we stop being driven by fear, anger, and a sense of inadequacy, we can find the motivation to achieve the impossible

Mastering our mind and thoughts is not enough to achieve great goals: we have to work hard, and spare no effort

Having a similar mental approach to David Goggins means living outside our comfort zone, and constantly improving: we always have 60% potential that we do not put to use

We can all achieve the impossible with hard work, by shaping our minds, and getting up early every morning

We must always be ready to get back up on our feet, and know that obstacles and difficulties are part of life