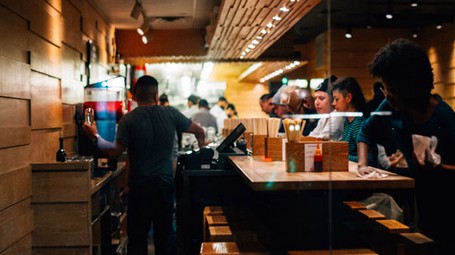 Born in 1977, David Chang is an American entrepreneur and public figure of Korean origin, founder of the Momofuku group, which has stores in New York, Sydney, Toronto, and Washington. In 2018, Chang created, produced, and starred in the Netflix television series Ugly Delicious. In 2011, he published the first issue of his food magazine Lucky Peach, a quarterly publication whose second issue entered the NY Times bestseller list. Chang also has his own podcast, "The David Chang Show," and is the author of two New York Times bestsellers.

A graduate of NY University, with a masters from Columbia, Gabe Ulla is a freelance writer in the areas of music, travel, and food. His articles are published by WSJ magazine, T, Lucky Peach, Bon Appétit, Saveur, Town and Country, Eater National, and The New Yorker.

David Chang comes from a traditional Asian family, and everything that comes with it

David Chang's father was the stereotypical Korean man who distanced himself from everything that America stood for. Throughout his childhood, David was denied access to the world, as his father deemed it too far removed from Asian communities. He was a tiger parent, who forced a young David, around the age of six, to stop being ambidextrous - one of the few natural abilities that his son possessed and of which he was proud: from that moment on he would stop using his left hand. The cost of questioning his authority came at too high a price. When a year later David had an accident while playing with his brother, before giving in to his cries and taking him for an X-ray, his father forced him to go to acupuncture sessions and - most importantly - to walk despite his fractured knee, determined to make him realise that the pain was all in his head.

His family dynamic, however, also had its positives: since his parents were always working, David spent his childhood with his maternal grandparents, who were kind and adoring in an almost comical way.

The key ideas of "Eat a Peach"

David Chang comes from a traditional Asian family, and everything that comes with it

Theology, philosophy, even a dabble in the world of finance. Then, finally, the discovery of the world of catering

The first time in the kitchen teaches David that he still has a long road ahead of him before becoming a chef, but the real lesson is: do not give up

David's first depressive breakdown brutally devastates him. Unable to see any other way out, he embarks on a flight to Japan

Coming face to face with his desire to die, David manages to take the right step: seek the help of a specialist

Success has many side effects, most notably it awakens the fear of falling short. Paranoia makes a comeback as an enemy that must be defeated