Home History and Philosophy How to think like a Roman Emperor 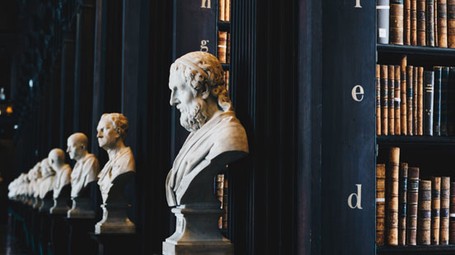 Donald Robertson is a psychotherapist who specialises in cognitive behavioural therapy. He was born in Scotland, then lived in England, before subsequently moving to Canada, where he now lives with his family. He also works as a trainer, and has published several books, including Build Your Resilience and How to think like a Roman Emperor: The Stoic Philosophy of Marcus Aurelius. His interest in Stoicism has led him to dedicate several years of his life to the study of this philosophical tradition, as well as contributing, as one of its founding members, to Modern Stoicism, a non-profit organisation which helps people live a better life by using the principles of Stoic philosophy.

From the origins of Stoicism, to Marcus Aurelius and the modern-day: the love of wisdom and rationality

Once upon a time, there was a merchant named Zeno of Citium. One day, Zeno lost all of his wealth after losing a precious cargo of goods to a shipwreck. To survive, Zeno relied on the philosophy of those who had preceded him; drawing on different sources, from Socrates to Cynicism, to the Megarian and the Academic Schools of philosophy, Zeno finally founded his own school. Stoicism takes its name from the porches (stoa) under which Zeno's disciples used to walk and gather to philosophise. Following Zeno’s death, the next masters of Stoicism were Cleanthes and Chrysippus. Greek philosophy also took root in the Roman Empire and, five centuries after its birth, it reached Marcus Aurelius. The boy, destined to become emperor, relied on the knowledge of his masters, and embraced the Stoic philosophy unreservedly; it is said that he considered himself first a Stoic, and then an emperor.

Thanks to the Meditations of Marcus Aurelius and the writings of other Roman authors and philosophers (mainly Epictetus, Seneca, and Cicero), we are now able to understand what it meant to live one's life according to Stoic philosophy. Every philosophical tradition is characterised first and foremost by what it believed to be the primary purpose of life: for the Stoics, it is about living according to wisdom.

The Stoics argue that, since the characteristic that distinguishes humans from other animals is their ability to think, reason must be their main tool, and is that which governs their decisions and allows them to assess whether thoughts, emotions, and desires are good, bad, or indifferent; we must therefore protect and exercise our ability to reason and be rational, as wisdom comes before all else.

The Stoics also discuss the role of other important virtues in relation to wisdom: justice is wisdom in the social sphere, courage is wisdom in the face of fear, moderation is wisdom in the face of desires. Despite the form it may take, wisdom requires the ability to distinguish between good (the virtues), bad (the vices), and indifferent things (everything else). What is intended by classifying everything else as indifferent? Of course, there are some things that are preferable to others: anyone of us would prefer wealth, health, and friends over poverty, disease, and enemies; but it is also true that all of these things can be good or bad, depending on how they are dealt with, and in this sense, they are indifferent.

Things like health, wealth, and reputation are mostly opportunities, which life allows us to use to our advantage to live better; but they are not things that should be accumulated ad infinitum, because we risk caring more for them than for our wisdom. The Stoic, therefore, does not live to accumulate advantages, but to welcome whatever comes their way and face it wisely, exploiting its goodness or transforming it into something more positive; in other words, the Stoic needs nothing, but uses everything to the fullest.

The Stoic's happiness comes from three sources: first of all, there is internal happiness, created by the joy and peace of mind that derive from living according to one's own wisdom. Second, the Stoics are happy as a result of doing good: since all human beings are gifted with reasoning, they are in essence all our brothers and sisters, and therefore we must care for them. In this sense, the Stoic sees themself as a citizen of the universe, and interacts with others, displaying the virtues of justice, friendship, fairness, and kindness. Finally, joy also comes from a healthy sense of aversion to vices, therefore from the ability to exercise awareness, honour, dignity, and integrity. In contrast to these sources of happiness, there are of course also negative emotions; according to the Stoics, they must not be suppressed, but instead accepted for what they are and faced with courage, self-control, acceptance, and assertiveness as a result of one's capacity to rationalise: feeling fear, worry, pain, and temptation is natural, but the important thing is the way in which one chooses to react to these emotions.

When we accept Stoicism as a philosophy of life, requiring daily practice, we have the opportunity to acquire greater emotional resilience, greater strength of character, and moral integrity. Stoics can teach you how to find meaning in life, face adversity, manage anger, moderate desires, experience healthy sources of joy, resist pain and disease with patience and dignity, show courage in the face of your anxieties, manage losses, and deal with your own mortality in a relatively imperturbable manner. However, it is important that you have the strength and patience to apply Stoic teachings on a daily basis.

The key ideas of "How to think like a Roman Emperor"

From the origins of Stoicism, to Marcus Aurelius and the modern-day: the love of wisdom and rationality

Words have weight: talk to each other objectively so as not to feed fear

Training to face your fears to find creative solutions to problems

Anger is unnatural: avoid it with kindness and acceptance