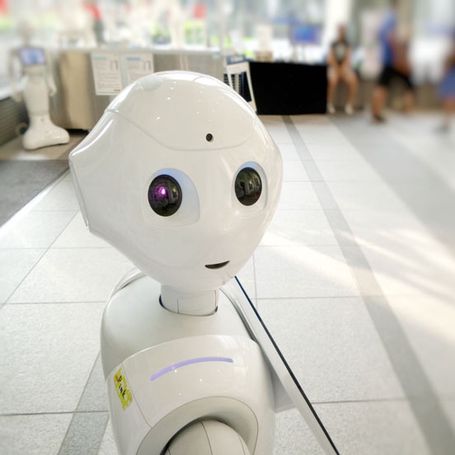 H. James (Jim) Wilson is Managing Director of Information Technology and Business Research at Accenture. Before joining Accenture, he was involved in research and innovation programmes at Babson Executive Education, Bain & Company, and various other business think tanks. He is the co-author of The New Entrepreneurial Leader and is a long-time contributor to the Harvard Business Review and The Wall Street Journal on the topic of how smart machines can improve employee and business performance. He holds a BA from College of the Holy Cross and a MA from Boston College. He has worked with governments, organisations, universities, and businesses – from NASA to the NFL Players Association – on the application of AI technologies.

Paul R. Daugherty is the Chief Technology and Innovation Officer at Accenture, where for years he has led a research team on artificial intelligence, as well as founding the Accenture Artificial Intelligence Practice. He studied computer engineering at the University of Michigan, as well as having attended a course on cognitive science and psychology, which brought him closer to the world of AI. During his professional career, he has worked with thousands of business and government leaders, helping them to apply technology to transform their organisations. He is a speaker and writer on manufacturing and technology, appearing frequently in the press, such as the Financial Times, Forbes, and Harvard Business Review. In 2019, he received the FASPE Award for Ethical Leadership, and was included as one of the 100 technology leaders by Computerworld in 2017. He is a passionate advocate for gender equality, inclusion, and diversity in the field of technology and serves on the board of directors of Girls Who Code. He was recognised by the Institute for Women’s Leadership as a business leader who has supported diversity in the workplace and the advancement of women. He is a member of the World Economic Forum Global Future Council on the Future of Artificial Intelligence and Robotics and serves on the advisory committee for Computer Science and Engineering at the University of Michigan.

Today we find ourselves on the cusp of major change in the business sector, and this is thanks to recent advances in artificial intelligence (AI). AI systems are not only automating many processes, making them more efficient, but are also allowing people and machines to work together in new ways. This is changing the nature of work itself, with greatly varying ramifications for both the management of business operations and employees alike. For decades, robots have typically been large machines carrying out single specific tasks that formed part of a strict and fixed work process chain in which human beings handled other predetermined activities.

The new breed of industrial robots is different: they are collaborative machines equipped with a function which allows them to sense their environment, understand, act, and - thanks to automated learning software and other associated technologies - the ability to learn. These changes are not exclusive to mass production: artificial intelligence systems are being integrated into all departments, from sales to marketing, from customer service to product research and development.

Businesses are reaching a crossroads regarding their use of AI, namely the systems that build upon human ability by means of perception, understanding, action, and learning. By implementing these systems, some businesses will see small short-term increases in productivity, but these results will eventually plateau. Other businesses, on the other hand, are able to achieve revolutionary improvements in performance. What causes these differences?

Although AI can be used to automate some business functions, the true power of this technology lies in using it to supplement and increase human abilities. In essence, the best results are achieved when machines do what they know best, such as performing repetitive tasks, analysing huge data sets, and handling routine cases, capitalising on characteristics like speed, accuracy, repetition, predictive capabilities, and scalability. Meanwhile, human beings can do what they do best: resolve ambiguous information, exercise judgment in difficult cases, and negotiate with unhappy customers, using skills like creativity, improvisation, finesse, judgement calls, social skills, and leadership. This type of emerging synergy between humans and machines is driving the so-called “third wave of business transformation”. The first wave consisted of the standardisation of processes: it was introduced by Henry Ford with the creation of the assembly line. The second wave revolved around automation: it emerged in the 70s and reached its peak in the 90s with the business process reengineering movement, thanks to huge advancements in information technology (IT): the desktop computer, big databases and software that automated various back-office activities. Today, we are in the throes of a third wave, in which artificial intelligence systems are enhancing human ability and working with us to improve productivity in ways never seen before. The third wave is being built on adaptive processes that are being reinvented from the ground up, with this adaptability being driven by real-time data rather than a standardised sequence of steps.

The key ideas of "Human + Machine"

Filling the “missing middle”: reimagining business processes so that humans and machines can perform at their best

Business processes that are repetitive, reproductions, or redundant are ready to be automated