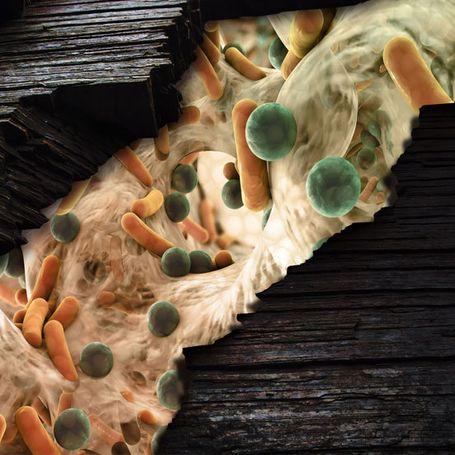 Ed Yong is a science reporter who has written for The Atlantic magazine since 2015. His work has featured in a wide variety of publications such as Nature, Scientific American, Wired and The New York Times. He has a degree in natural sciences from Cambridge University, after which he obtained a master’s degree in philosophy and another one in biochemistry. He was born in Malaysia and moved to the UK at the age of 13, later becoming a British citizen. He has received numerous awards for his journalism; in 2010 the National Academy of Science of the United States awarded him the National Academies Communication Award.

Animals appeared in a world that had already been teeming with microbes for billions of years.

All visible organisms, which grouped together we call "nature", were the last to arrive on Earth, which was already more than four and a half billion years old when they finally appeared. To get a better grasp of this concept, we can group it into a more relatable timeframe. Let's imagine that it is December 31st, and that the year that is about to end represents the life of the planet; using this proportion, we can say that human beings have existed for just over half an hour! Just over half an hour compared to a full year is the proportion of the existence of men and women on Earth to microbes. Plants and animals would already be present by early December, and going back in time, the first multicellular organisms would have appeared in October. So life on Earth was born in March, and from March to October the only inhabitants present were unicellular organisms, or microbes.

Microbes were the first organisms to inhabit the planet and to change it, the first organisms able to produce their own nourishment, exploiting the energy of the sun, releasing oxygen as a waste product, for the benefit of the atmosphere. Microbes have the ability to enrich the soil and eliminate pollutants, and it is thanks to their contribution that we live in an oxygenated world. They are literally everywhere; in the depths of the oceans, in the Antarctic ice, in the clouds, even in the very hot hydrothermal springs.

We human beings have evolved among them as well as from them. Microbes cannot be seen with the naked eye, and are generally considered to be carriers of germs and diseases. This stereotype does not do them justice: the majority of microbes are not pathogenic, do not make you ill, and are actually essential to the continuance of life on Earth. Of all the existing species of bacteria, the ones that cause diseases are less than a hundred, the thousands of species that are found in our body are harmless, and many of them protect the balance and health of the body. They help us digest food, produce vitamins and minerals, break down toxins and dangerous chemicals, and protect us from disease by taking space away from dangerous microbes or by eliminating them directly. They intervene in the construction of our body, educate the immune system and contribute to the development of our nervous system.

The key ideas of "I Contain Multitudes"

From Pasteur onwards, bacteriology became a science that studied microbes to destroy them; in fact they are fundamental components of life on our planet

It really does depend on the context: microbes are never good or bad at all, and our relationship with them is made up of continuous adjustment and negotiation

A lifestyle that involves little interaction with microbes leads to a weakening of the immune system, and therefore to poor health

Instead of removing microbes from our bodies and environments, we might want to consider adding them, in order to create microbiomes that support the life of our planet