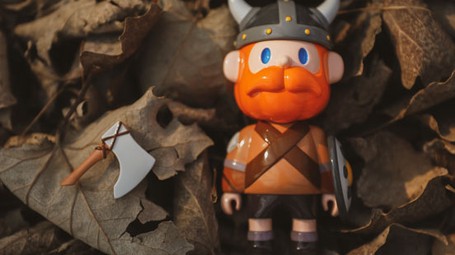 Gianna Chiesa Isnardi (1949-2016) was Professor of Germanic Philology and Professor of Scandinavian Culture and Literature at the University of Genoa, where in 1992, she also founded the Department for Nordic Languages and Cultures. She is considered to have been one of Italy’s leading experts in Nordic mythology. A passionate scholar, she devoted much of her life as a researcher to mediaeval and modern Scandinavia. In 2016, she was named ‘Scientific Personality of the Year’ by the Foundation for Languages and Culture (Stiftelsen Språk och Kultur) at Umeå University, Sweden.

The etymology of the word ‘Viking’ is still uncertain. The most accredited hypothesis is that it derives from the Nordic term vík (“bay”), to which the suffix -ing is added, which identifies the name of a population. The term Viking, therefore, could mean ‘marauder who lands in the bays’ or ‘marauder who goes from bay to bay’. The term Viking identifies both a number of different peoples – Swedes, Danes and Norwegians – as well as a specific historical period in ancient Scandinavia. Originally, the term had a more specific meaning, and was only used to refer to rebels, in other words, men who sought to be masters of their own lives, by escaping the fate of the community they were born into. They did this by engaging in trade, war, and seeking out adventure. In the society of the time, life was difficult, tiring, and uncertain. People came of age when they were twelve, and every day they struggled to survive in a land that was anything but prosperous, where nature was more of a stepmother than a mother. So there were plenty of incentives for a person with initiative and willpower to try to improve their lot in life.

Viking society was divided into groups, each led by a single leader to whom all members swore loyalty. This loyalty was reinforced by a shared ideal that self-affirmation was the ultimate goal of human existence. Over time, these rebels managed to form a peasant society that was still closely tied to ancient traditions, to the point of imposing a new idea of life. This is why the term ‘Viking’ was later used to refer to the Norse society as a whole during this historical period, and not just the rebels.

Viking society was patriarchal, but women still had more chance of achieving positions of prestige, compared to other communities. However, widows tended to remarry as soon as possible, and very often chose to wed the brother of their dead husband, because the support of a man was almost always necessary to ensure a decent life for the woman. The Vikings initially lived on isolated farms, rather than in villages, but with the increase, and success, of trading expeditions and conquests, this began to change. Town-like areas were formed, which had to have an outlet to the sea, and served as both markets and fortresses. Such towns include Hedeby, in Denmark, or Birka, in Sweden. Novgorod and Kiev were also built at key points along the routes taken by the Vareghi, the Swedish Vikings, during their explorations eastwards.

The key ideas of "I miti nordici"

The Norse pantheon consists of many deities, each with different origins, importance and functions

Religion and magic represent different attitudes to the deities

Odin, Thor, Loki and Freyja are some of the most important gods in the immense and stratified Norse pantheon

The minor deities include the Norns, the Valkyries, the elves, and deformed beings

Colours and numbers represent the different qualities of being

Animals are forces that mediate between the human and supernatural worlds