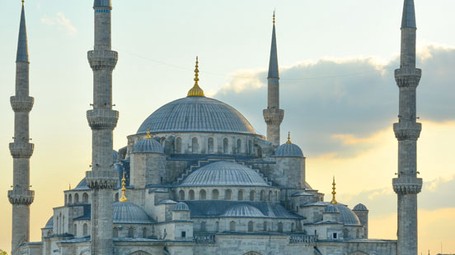 Alessandro Barbero is a historian, academic and a writer. He is an excellent communicator and populariser who teaches mediaeval history at the University of Eastern Piedmont and Vercelli. In 1996, his novel ‘Bella vita e guerre altrui di Mr Pyle, gentiluomo’ won him the Premio Strega, the most prestigious Italian literary award. Since 2007, he has worked with Rai television on Superquark with Piero Angela, and other programs. Some videos he published on YouTube went viral and made him a web star.

When we talk about the Ottoman Empire we mean the multi-ethnic and multi religious empire that covered the vast area that stretching from Algeria to Mecca, and from Baghdad to Belgrade, an area so large that it covered many different countries, languages and cultures.

The seat of the Ottoman Empire was established in Constantinople, between present day Turkey and the Balkans, by Sultan Mohammed II, known as the conqueror. At the time, this was the seat of the Eastern Roman Empire, but then became the seat of the new, Ottoman empire.

The Ottoman Sultans were descendants of nomadic steppe empires, which is why they didn’t build a palace to settle in as soon as they arrived in Constantinople, but a camp of stone tents. The steppes were the endless grasslands of central Asia, across which nomadic groups herded their flocks, and the people that come from there are known as Steppes.There are in fact similarities between the Ottoman symbol of power, which was the ponytail, and the one that these nomadic chiefs planted in front of their tents. The way they fought also reflected their nomadic origins. In the steppes, warriors fought in gangs on horseback, and they fought at a distance, using bows and arrows. They never sought contact combat, and always managed to win from a distance, a style of fighting that was entirely new to the West. Nobody had ever used this method before, and that is why people began to fear the Turks as barbarians, whose bravery they begrudgingly admired because they were unbeatable. Even the crusaders, who were equally ferocious, were impressed by the fighting skills of these young Turks, who had aroused a mixture of admiration, terror, and respect from all of their opponents, a reputation which endured for centuries. In Italian, this fear was even converted into an exclamation that is still used in common language today, to signal a friendly ‘‘watch out, danger about!’’

Having said that, the fascination went both ways, because the Ottomans were strong warriors, but Italy was rich in art, technology and manpower. The Sultans ordered many products from Italy such as reading glasses, maps, watches, glass window panes, light fittings and spare parts for their boats. When the daughter of the sultan Solimano decided to make an aqueduct in Mecca to provide water for the pilgrims, the Sultan ordered the steel parts from the west because in the east, they had not even begun to work with steel yet. Mohammed II, known as the Conqueror, called Gentile Bellini and other painters to Constantinople from Venice to paint portraits, which were very fashionable in the west at the time, but still uncommon in Turkish culture.

The Ottoman Empire grew, and through its strength and determination, came to be recognised as a great world power. Under Soliman the Great, the Ottoman Empire reached its peak, expanding far and wide, and became the second greatest super power in Europe and the Mediterranean. It also reached the peak of its artistic and cultural achievements, and built the mosques for which Turkey is still known today.