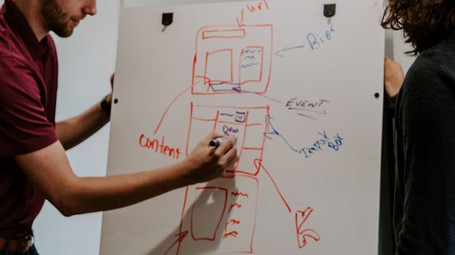 California born Reid Hoffman is an entrepreneur, recognised by many as one of the most successful investors in the history of Silicon Valley. He is the co-founder of Linkedin, and was a member of the board of directors during the founding of PayPal, and later became the COO. Today, he is a board member of Greylock, Microsoft and many other organisations, including several non-profits. He has written several books on entrepreneurship, such as Blitzscaling, The Alliance, and The Start-Up of You. He also directs the award-winning podcast Masters of Scale, from which his book of the same title took its name.

June Cohen is the co-founder and CEO of WaitWhat, the media invention company behind Masters of Scale. Formerly, she was the head of Media for TED, where she launched TED talks on the internet. Prior to TED, June was the VP of Content at HotWired.com.

Deron Triff is co-executive producer of the podcast Masters of Scale, and co-founder of the digital company WaitWhat. He worked with Cohen on the executive team at TED, which, under them, won 17 Webbies, the iTunes Podcast of the Year prize 8 times, a Peabody, and a National Design Award. Previously, Triff was vice president of digital at the non-profit tv network PBS (Public Broadcasting Service), where he also launched Sprout Network.

‘No’ is an overlooked opportunity, it doesn’t always mean what you fear it does

Many entrepreneurs who start a startup dream of scaling, or of taking their company to the highest levels of success. Not only is scaling a science, but it is primarily a mental model, which requires you to be willing to learn from success and failure in equal measure.

When you first start, failure comes in the form of the many “no's” you get from investors when you present your idea. A "no" can become a very useful tool to help transform an idea from good to excellent, but to define the strategies and objectives to make this happen, you must learn to recognise the different types of "no" that you receive, and to learn what you can from each of them.

The "lazy no", for example, is useless because it comes from people who have either missed the point of your idea, or can’t be bothered to look into it further to understand it. An example of a "lazy no" is the one often received by Tristan Walker, founder and CEO of Walker & Company, a company that makes beauty products specifically designed for men and women of colour. One of his many "nos" came from white investors, who could not fully grasp the importance of an idea that would serve a completely different market. As soon as you realise that you will not be able to get any other reaction from the people you are presenting to, quickly move away from these types of "no", because they will not bring any value to your idea.

What the authors call the "squirmy no" is very useful. It comes from business ideas that make you want to say yes and no at the same time, because they are ideas that break the status quo, with the potential to be really great, or a complete disaster. In fact, often the greatest ideas are those that go so strongly against the grain that they seem almost ridiculous; this is how people looked at Airbnb when it was first presented. If you have an idea that breaks the norms, and that envisions different ways of doing things, be prepared to get many "nos", but don't abandon it too quickly.

The affirmative no is useful because it is proof that you are on the path to something big and something different. When Kara Goldin created Hint Water, a line of sugar-free flavoured waters, she received many "nos" that were justified by saying that Americans love sweet flavours. These "nos" helped her to understand that other companies would never stop making sugary drinks, leaving a large section of the market open for her product. You shouldn’t be put off by the affirmative “nos”, but it can be useful to listen carefully because they often hide excellent advice.

The "honest no" is the one that will help you to understand the difference between a winning instinct and a wrong idea. When these "nos" make you realise that your idea really doesn't have much potential, don't be afraid to ditch it quickly. Learn to trust that your instinct will help you come up with a better idea. So, it’s best not to get too attached to your ideas, at least in the beginning.

The last one is the "useless no". This usually comes from friends and family, people whose opinions have an emotional impact on you, and they tell you no because they want to protect you from failure. If you think you are sensitive to these "nos", don’t share your idea with these people, at least at the beginning when it is fresh and vulnerable.

The key ideas of "Masters of Scale"

‘No’ is an overlooked opportunity, it doesn’t always mean what you fear it does

Before you think big, you need to think small, and take care of your most faithful customers

Great ideas don’t just fall from the sky, you need to have the right ingredients

Speed and patience: an important balance to achieve success

The qualities of a true leader: adaptability, courage, availability