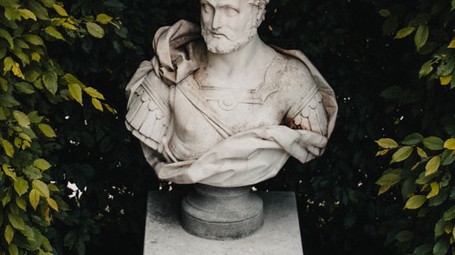 Born in the year 121, Marcus Aurelius was the emperor of Rome from 161 until his death, nineteen years later. He inherited his position from his adopted father, Antoninus Pius, and he shared the first years of his reign with his adopted brother, Lucius Verus. Alongside his role as emperor, Marcus Aurelius was a passionate philosopher of Stoicism: his book, Meditations, is considered among the greatest works of ethical and spiritual reflection of all time, and, not surprisingly - has become a must-read for many philosophers and statesmen who have succeeded him.

The questions this book tries to answer are both ethical and metaphysical: why are we here? How should we live our life? How can we make sure what we do is right? How can we protect ourselves from life’s daily struggles? How should we deal with pain and adversity? How can we live with the knowledge that, one day, we will no longer exist? According to Stoicism, the world is organised in a rational and coherent way, and is controlled by an omnipotent force: the logos. This force operates both in individuals and in the universe: in people, it is presented as the ability to think and reason, while at a cosmic level, the logos is the rational principle that governs the organisation of the universe itself. Even though the logos has a plan for them, human beings can still exercise responsibility in their choices and their actions. Things or events in themselves are not important, what is important, is the way in which we interpret them: according to Stoicism, it is therefore up to us to exercise strict control over our perception, with the aim of protecting our mind from making mistakes.

In the first part of the book, Marcus Aurelius writes about what he admires about and has learned from his relatives and teachers throughout his life. For example, he appreciated his grandfather's self-control, his father's integrity, and his mother's generosity, and her kind and gentle nature. From other family members, from his teachers and other philosophers, he learned much of what guided him throughout his life: doing his job without complaining or thinking about how others might react. He learned to be free from passions and impulses, yet always full of love; to love his family, truth and justice; to recognise how power can lead to malice and hypocrisy; to try and be patient with someone who has irritated him, and accept a favour from a friend without losing self-respect, but never without appearing ungrateful. Marcus Aurelius learned not to get caught up in distractions, and not to spend time with slanderers; to lead a life defined by optimism, dignity, and grace.

The person who seems to have had the strongest influence on his life is his adoptive father; Marcus Aurelius writes how much he admires his endurance and work ethic, as well as the fact that he stayed faithful to his decisions once they had been made. He says that his father was consistent in his friendships, that he knew when to push and when to withdraw, depending on the circumstances, and that he felt at ease in the company of others, and knew how to make people feel comfortable in his presence. Moreover, Marcus Aurelius appreciates how his father managed his wealth and material comforts, and struck the perfect balance, without touching the extremes of either arrogance or shame. He knew how to approach every event in life with logic, consideration, calm, discipline, and resolve.

The key ideas of "Meditations"

The world in which we live is fleeting and constantly changing

At the end of our lives, there is death: a natural process that we should not fear in any way

Pain is bearable if it is imposed by nature, and it does not threaten your integrity

Our relationships with others can be defined by kindness, understanding and compassion

Nature wants our souls to stay pure, not to be touched by pain or the distractions of this world

A few tips to live a life based on integrity, humility and kindness