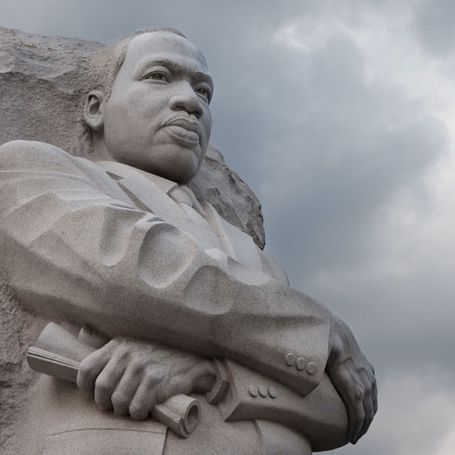 Martin Luther King, Jr. was an American pastor and activist, who is now considered to be one of the most important public figures of the twentieth century. He was born in Atlanta to a family of pastors, and studied at Boston University's School of Theology. He married Coretta Scott, with whom he had four children, and he was the leader of the African American civil rights movement, spearheading several campaigns around the United States, as well as winning the Nobel Peace Prize in 1964. He published several books, including Stride Toward Freedom, Letter from Birmingham Jail, and Why We Can't Wait. He was assassinated in Memphis in April 1968.

Born in New York state and raised in New Mexico, Clayborne Carson is a professor of history at Stanford University. Born in an African American family, he participated in some of the movements organised by Martin Luther King Jr. in the 1960s, and was an active member of the struggle for civil rights in America. He is currently the director of the Martin Luther King, Jr. Research and Education Institute and, since 1985, has directed the Martin Luther King, Jr. Papers Project, which aims to review and publish all of the documents that MLK wrote during the course of his life.

The happy early years: Atlanta, the loving influence of family, and new discoveries at college

Martin Luther King, Jr. (MLK) was born on January 15th, 1929, shortly before the outbreak of the Great Depression - a period of economic hardship that probably had an influence on the anti-capitalist sentiments that he would go on to develop later in life.

He lived a peaceful and healthy childhood, with two parents that he considered to be wonderful: Martin Luther believed in the love of God throughout his entire life, due to the fact that he grew up in a family where love was never in short supply. Martin Luther's mother, Alberta Williams King, was a shy woman, but nevertheless, warm, and friendly. It was through her influence thatMLK and his brothers learned self-respect, and that racial segregation had nothing to do with the natural order, but was merely a social condition that should never make them feel inferior. His father, Martin Luther King Senior, was a strong, courageous, and self-confident person, and was considered by his son to be a man of integrity, who was honest, and strongly attached to his moral and ethical principles. He was the pastor at the Ebenezer Baptist Church in Atlanta, which is where Martin Luther joined the religious community from an early age.

Martin Luther vividly remembers an episode that stands out in his peaceful childhood, which he experienced at the age of six: a friend of his, who was white, was one day forbidden by his father to play with Martin. For the first time in his life, MLK was confronted with the existence of a racial problem, and was shocked. As he grew up, he continued to develop a growing resentment towards segregation, considering it to be a real injustice: in Atlanta, black people were not allowed to go to the swimming pool or public park, and were forced to attend different schools and cinemas from the white population. Not to mention the buses: Martin Luther remembers a trip during which he was forced to remain standing for more than 140 kilometres because he was not permitted to sit in the seats reserved for white people. He was not only outraged by segregation itself, but also by the barbaric and oppressive acts that often derived from it, as well as by the fact that racial injustice also brought economic injustice, resulting in poverty and instability.

At the age of 15, MLK went to Morehouse College: there was a sense of freedom in the air at this place, and it is where he became involved in his first discussions on the question of race. It was here that he came into contact with the concept of nonviolent resistance for the first time, after reading Civil Disobedience by Henry David Thoreau. Day after day, Martin Luther reflected on a new idea: non-cooperation with evil is as much a moral obligation as cooperation with good; evil must be resisted, therefore no person with a sense of morality can ever accept injustice. In college, he began to collaborate with some civil rights organisations and, in the meantime, started thinking about his future: he had always felt the need to work in the service of others, but was unsure in what capacity. After much doubt over whether to pursue a career as a doctor or a lawyer, he finally found inspiration in the high esteem he felt for his father, and decided to enter the seminary.

The key ideas of "The Autobiography of Martin Luther King, Jr."

The happy early years: Atlanta, the loving influence of family, and new discoveries at college

From the seminary, to university, and then life's greatest inspiration: Mahatma Gandhi

The beginning of it all: Rosa Parks unleashes the Montgomery Movement

Inspiration outside the United States: the birth of Ghana, the pilgrimage to India

Protests ramp up across the South, and the need for support from above

Letter from Birmingham Jail: a heartfelt call for non-violence and justice

The March on Washington: a big dream that turned into disappointment

St. Augustine, Selma, Watts: the struggle for civil rights must go on

The Chicago Campaign: from the depths of despair to success

Martin Luther King reflects on the nuances of the slogan "Black Power": non-violence continues to be the priority

From the top of the mountain to depths of the valley: the Nobel Prize, and his last day alive