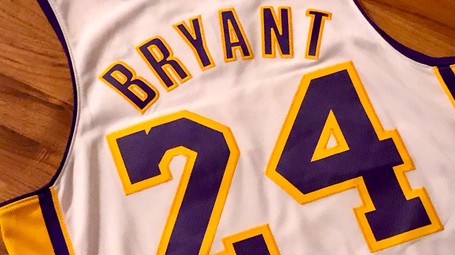 Kobe Bryant, born in Philadelphia in 1978, was one of the most accomplished and celebrated athletes of all time. The son of former NBA player, Joe Bryant, he spent his 20-year career as a professional basketball player in the NBA playing for the same team, the Los Angeles Lakers. At 18, he was the youngest player ever to join the league, and was the first guard in NBA history to play at least 20 seasons. During the course of his career – among many other accolades – he was five times NBA champion, he won two Olympic gold medals, he was selected for the All Star Team eighteen times and won four All Star Game MVP awards. The letter in which he announced his retirement from basketball in 2015 was converted into an animated short in 2017 called “Dear Basketball”, which won the Oscar for best animated short film in 2018. Bryant was the first ever sportsman to win that award. Kobe Bryant died on 26th January, 2020 in a helicopter crash in Calabasas, California

To become great in any field it takes determination, hard work and an excellence mindset

Kobe Bryant is considered one of the greatest basketball players of all time. He spent his entire twenty year career as an NBA professional playing for one team, the Los Angeles Lakers, and became known as “Black Mamba”. The black mamba snake is one of the most dangerous and poisonous snakes in the world, always on the hunt for its next victim, and Kobe earned this nickname for his extremely competitive nature and the aggressive playing style, which was always focused on the win. However, the “mamba mentality” – a definition that started as a hashtag on twitter – is also about rigorous training, careful attention to detail and a sharp mind. Over time, the “mamba mentality” became a real trademark for Kobe, the synthesis of his approach on the hunt for extraordinary results. When Bryant started in the NBA, he was only 18 years old, which made him one of the youngest players ever to be signed up to the League. Just two years later, he became an All-Star, and from then on, he stayed at the top of basketball for two decades, becoming a fully-fledged legend in this sport. Reaching such legendary heights is no easy task, though. It takes determination to beat your competitors, focus to keep sight of your objective to become the best in the game, and sacrifice to train your mind and body every single day. The Mamba Mentality is the mentality that leads to excellence, not only in basketball, or in sport in general, but in every area of your life. To become truly great in any field, it takes constant and serious commitment.

To be the best at something, you need to develop a true obsession for it. Many people say that they want to be great, but they are not prepared to make the necessary sacrifices to achieve greatness. From the very moment that he entered the NBA, Kobe Bryant focused on staying in peak physical condition. He lifted weights at least four times a week, from Monday to Friday. His weight training sessions were anything but normal, they were exhausting and focussed on a specific muscle group each time, and he pushed those muscle groups to their limits. A lot of players reduce weight training and gym sessions during the game season to conserve their energy. But Kobe Bryant realised that as tiring as they were, his strenuous training sessions made him stronger, faster and more prepared for the tough challenges that the playoff season threw at him. He trained early in the morning, and often late in the evenings too.

A typical day for him usually started with his first workout at 5am, followed by four hours’ rest. His main training session was from 11am to 4pm, then another four hours’ rest followed , and he always did a final gym session from 6 until 8 in the evening. Sometimes he even trained late in the evening after dinner. This strenuous training was a result of his great determination, deriving from a combination of obsession for the game and the sense of responsibility that he had for the world off the court. Starting his training early enabled him to find a balance between basketball and life, to be home with his children when they woke up in the morning and to put them to bed at night. He refused to make sacrifices in his training, but neither would he take any time away from his family to pursue his sporting ambitions. Finding that balance was never easy, and Kobe often missed out on his sleep to keep up with it all.

The key ideas of "The Mamba Mentality"

To become great in any field it takes determination, hard work and an excellence mindset

Failing is an essential step on the way to excellence

The importance of exchanging with others: learning from mentors and coaches and encouraging his teammates to give their best